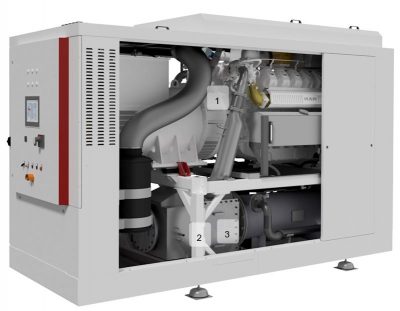 For our compact CHP units with turbo engines we offer an emissions reduction solution with SCR catalyst fully integrated into the CHP unit’s sound absorbing case. It complies with all limit values of the German 44. BImSchV and and can already reliably reduce the NOx emissions below the limit value of 0,1 g/Nm³ which will be mandatory from 1.1.2025 on. The CHP units can be equipped with the SCR catalyst right away or be delivered fully prepared for the equipment with an SCR catalyst later on. The emitted NOx-values are measured continuously, logged very 10 seconds in the CHP unit control and transferred, if demanded, to the CHP operator and/or the authorities as the day’s average values via our remote monitoring system.

Since the energy production with least emissions is one of our core objectives, catalysts are a standard feature of our CHP units for decades. For the CHP units with suction engine (GG 50-260) this is a regulated 3-way catalyst for the Lambda=1 operation which reduces the CHP unit’s emissions below the limit values of the mentioned guideline without further changes in construciton or equipment.

AdBlue consumption and NOx emissions of the compact CHP unit GG 530 SCR before and after the SCR catalyst.

For CHP units with turbo engines we have developed a solution years ago to reduce the emission of nitrogen oxides (NOx) from the back then valid limit value 0,5 g/Nm³ to below 0,1 g/Nm³. As a result of this development we have presented the prototype of the compact CHP unit type GG 402 SCR on Hannover Messe 2017. By equipping the catalyst system inside the CHP unit with an SCR-catalyst and accessoires wie have achieved the targeted substantial reduction of the NOx emissions.

Natural gas powered CHP units produce heat and power with much less pollutant than conventional boilers (heat) and large power plants (power) for decades. Also before the German 44. BImSchV came into effect, they emitted – according to the registered German association ASUE (Consortium for the efficient and eco-friendly energy consumption) – 58 % less carbon dioxide (CO2), 98,5 % less sulphur dioxide (SO2), 99 % less dust and 29 % less nitrogen oxides (NOx) than the energy producers named above.

For over 40 years we find our drive in climate protection and continuously improve the energy efficiency and performance of our products.