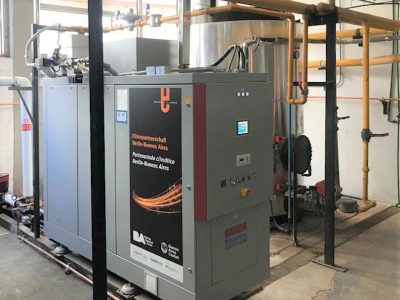 The capitals of Argentina and Germany, Buenos Aires and Berlin, have started a city partnership in 1994 and decided to strenghten their relation with a climate partnership in 2012. This climate partnerhsip started by exchanging information in the energy sector with a focus on best practices. One result was that numerous hospitals in Buenos Aires have a high specific energy consumption but none has a cogeneration unit. Across the Atlantic in Berlin, however, over 1000 CHP units produce efficiently heat and power for many years, also in numerous hospitals.

That is why the senate of Berlin started the project „Energy efficiency and cogeneration in public hospitals as part of the climate partnership Berlin – Buenos Aires“ to support its partner city with the installation of a pilot CHP unit in a hospital. A workshop on cogeneration, during which also a representative of the ministry of health presented the CHP unit which we had installed in the hospital of Santiago de Chile, marked the beginning. 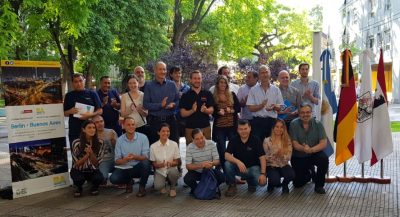 Representatives of the children’s hospital, Berliner Energieagentur and the Chilean installation company celebrate the commissioning together with our service technician and the translator.

Finally, the Buenos Aires children’s hospital „Hospital General de Niños Pedro de Elizalde“ was selected as a pilot project site and the German „Berliner Energieagentur“ mandated to implement the CHP project. In their following project tender we gained the order for our compact CHP unit GG 50. The installation works in the energy center of the hospital were supported by a cogeneration-experienced company from Chile. In November 2019 our technician could successfully started the permanent operation of the CHP unit. A first evaluation of the operation data transmitted by our web-based remote monitoring showed that the CHP unit runs over 21 hours per day and most of the time at full power.