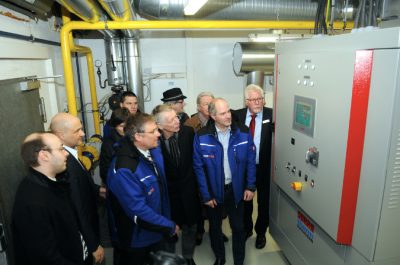 More modern, more efficient, more powerful: The municipal power company Stadtwerke Ettlingen (SWE) has officially inaugurated the new CHP unit in the Albgaubad together with mayor Johannes Arnold and SWE director Eberhard Oehler on March 20th 2018. The compact CHP unit GG 260 does not only provide heat and power for the swimming pool but also for the meeting venue Buhlsche Mühle and replaces an old unit.

„The new CHP unit is designed to also cover the increased energy demand of the educational swimming pool opened in December 2016“ Oehler pointed out. 381 kW thermal power are generated by the unit, well 20 % more than before. Moreover the power generated by the CHP unit covers nearly all the electricity demand of the Albgaubad with sauna and educational pool as well as of the Buhlsche Mühle. Superfluent power not consumed inhouse is fed into the mains.

„A CHP unit can unfold its efficiency best when a continuous heat demand exists. That’s why it’s ideal for the operation in the Albgaubad“  Oehler explained. SWE has invested roughly 300.000 Euro in the new plant which is, compared to the previous plant, even more efficient and therefore more eco-friendly. One reason is the condensing heat exchanger which gains remaining heat from the exhausts. Oehler: „CHP plants are among the most efficient and eco-friendly energy producers. Roughly 90 percent of the energy deployed are directly converted into heat and power.“

„In Ettlingen we apply the eco-friendly energy generation with cogeneration units for many years and reduce the emission of climate-harming CO2″ Arnold stated. To the mayor it is crystal clear: „To a future-oriented town like Ettlingen belongs a secure and sustainability-oriented energy supply.“ All in all, the SWE operate more than 20 CHP units. The first one has been commissioned in 1984 – in the Albgaubad.